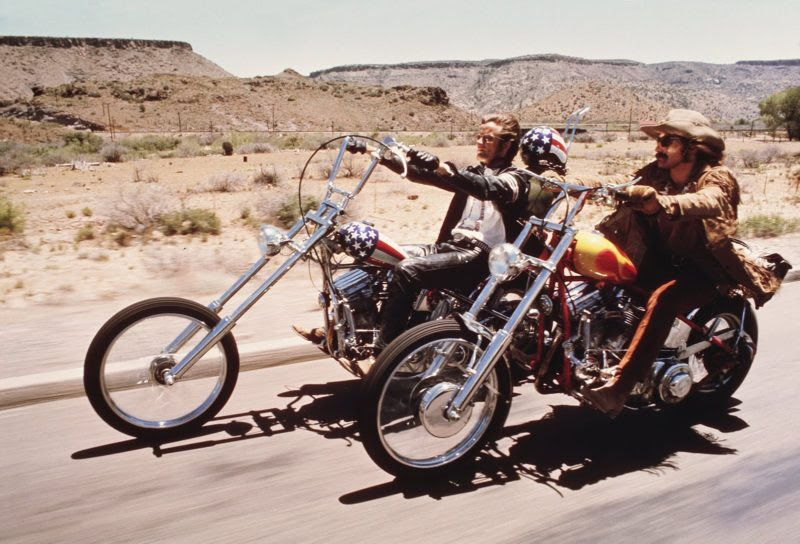 My personal take on Easy Rider is that it is a movie about a road trip across America. But it is also a movie about a 5th dimensional journey, embarked on by 4 of our "galactic family". The bikes are a metaphor for a galactic light ship. Anyone who sits on the bike is an "alien" (and also human).

I have not had time to connect ALL the dots in this movie, and there is yet another historic layer here...

However when they say "we failed" - this line throws a lot of people for a loop. Because they did reach their "stated" goal of experiencing Mardis Gras in New Orleans.

Well the reason they said this is that their mission involved what they talk about at the campfire - to enlighten humanity. But when they encounter "3-d" duality-based people - including getting beaten up by them -  this is when their mission fails. And the last scene (sorry for the spoilers) can be looked on as a ship crashing.

The 4 horsemen is yet another layer, because if you consider the Greek translation of the word "apocalypse" it refers to humanity's enlightenment.

I also found this to be forward-looking to "NOW" - the so-called "2012 scenario" - and also referring specifically to what we're doing within the "lightworker" community (or whatever it is you want to see it as!). Historically, it refers to the transition from the 60s and 70s, to the 80's and 90's... well you know how that went! Here we are again, and hopefully this time we will not be doomed to repeat what happened previously...

It can also be seen alongside such movies as "The Man Who Fell" which talks about a guy from another system that lands on earth, and succumbs to "3d". And also the song "Ride Captain Ride". (I'm sure you guys are familiar with this!)

So anyways, this movie pretty much sums up NOW because they talk about 1) the government coverup of our galactic family, and 2) the slavery of humanity. The "bad trip" they have represents succumbing to 3d... which includes the effects of organized religion as a "bad trip" (I thought that was a nice touch). As I said this movie is "multi-layered", and you may find other facets that resonate. In this exercise, all perspectives are valid. :-)

There are also clues to this synopsis in "The Ballad of Easy Rider" by Fairport Convention.