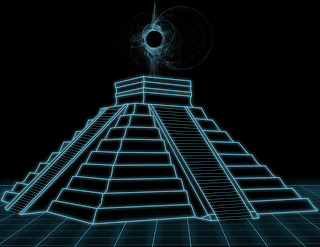 The "Galactic Light Ship" Tulya occupies many dimensions. To describe the exterior of the ship is impossible because it has different forms in each dimension.

Each ship is a portal to another dimension.

One exterior I see is similar to a Mayan step pyramid, except it is two pyramids, one on the top, one on the bottom, forming a diamond shape. It is black, with turquoise/ light blue light highlighting the edges. Somewhat reminiscent of the movie "Tron". At the top of the pyramid is red light.

Inside the pyramid I see the crew, they have blue skin... they are like the Na'vi from Avatar (without tails) in stature, perhaps somewhat thinner. Facial features are more similar to humans. Two eyes, nose, mouth. Oval eyes. These too are avatars, perhaps we are both avatars of each other. We become each other as needed (this movie was created to help us remember).

They are enjoying the job that they are performing, monitoring, and watching, for now. They venture out physically seldom from their craft, when they do venture out, it is using telepathy, again similar to the experience by the Na'vi, but the other way around - they borrow another body to experience that body's reality. There is no need to leave the ship. They are waiting for a transition, which will be very soon, after many, many years of carefully monitoring the progress, occasionally borrowing to monitor progress in finer detail, to understand those who they monitor.

Umbro... Tulya... Sasha - all playing a role further separated from oneness to facilitate teamwork in several roles. Would prefer to be closer in a oneness relationship rather than just teamwork but such is the requirements of this task... the separation is required to monitor other beings, which the ship cannot accomplish on its own, because it is performing its own tasks requiring collective consciousness.

The "Destiny" is another ship... (from Stargate Universe, in the second episode they mention the process of ascension)

They would enjoy others to drop in, it is as if there are a thousand crew members at all times, they enjoy it when someone borrows, it is an exciting event for them. A new energy on board the ship.

The experience of borrowing is always humanoid to humanoid, so the experience is rarely too different from one form to the next. It is possible to borrow animal form, but this is usually not necessary, and can be somewhat disorienting (seen as a recreational activity outside the goals of the mission).

We are watching you as you are watching us. By borrowing, when you allow, when we are invited to enjoy your planet. It is doubtful we would ever meet face to face physically, but that which was carved by the Mayans was indeed the result of borrowing, just as you are doing now. You have shifted your focus to the one who is closest in frequency to your own. You felt the discordant frequency and that is to be expected, but the level is high enough to allow borrowing, which is fine.

We welcome you always.

Thank you for this connection, we will hopefully speak (through thought) and borrow more in the future.

Different connection from what you're used to... but that is fine. A further expansion.
Posted by dreamwalker at 8:28 PM