The Afterlife (A Dream) 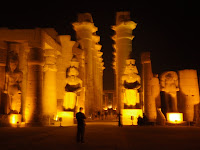 I was standing in the desert at the foot of the Temple of Luxor in Egypt.  The entire building was gold. Behind the statues at the entrance to the temple, there was a gold stepped pyramid with other statues lining the steps.

I started to climb the steps, and as I did so I emerged into a dark universe filled with stars. I could see the Milky Way clearly arcing over the cloudless sky. There was a platform near the middle of the pyramid, with columns on either side of the platform. There were two thrones on the platform; the stairs continued up the pyramid between the thrones. On the platform was various religious artifacts (an ankh, a christian cross, a Star of David, and a few others I didn't recognize), and there stood Anubis and a small dog-like creature that was a cross between a hippopotamus and a monkey/dog crocodile, with medium-length wavy red beard. It acted kind of like a cross between a loyal dog and an excited monkey, but it was fairly hideous to look at. (Apparently this was Ammut, eater of souls). Ammut's face was broader and shorter than a crocodile, more like a hippo but with sharp teeth. As I recall the name sounded more like "Hammut" or "Hanuman."

Anubis looked pretty much like he did in most representations of him - he had a black dog's head with pointed ears, similar to a doberman; a black man's body, and white Egyptian clothing with gold trim. He looked on me kindly and said:

"Good to see you again! Back for more eh?" Anubis was friendly and warm towards me as if we were old friends.

He stood behind a scale and reached out and took several balls of light from my body and placed them on the scales in front of him. He produced a large white feather, much larger than an eagle feather, and placed it on the other side of the scale. Ammut looked up happily wagging its tail, and I patted it on its head, scratched it behind its short stubby ears. The skin was leathery but smooth and soft, like a baby's skin.

The scale balanced, and Anubis smiled and said "excellent!"

I asked him, "What does this mean, exactly?"

"It means you get to choose your destiny, my friend! Please continue up to the top of the pyramid."

I walked past my two friends, up the stairs that went between the two thrones. When I reached the top of the pyramid, I found myself transported to a small Egyptian village, in the center of which was an area with tables and chairs, and a large rectangular area with medium-sized driftwood tent poles and canvas walls. A lovely trellis covered the top of this area, and palm fronds filtered the sun. The temperature was warm but mild, a cool light breeze blew through the village. 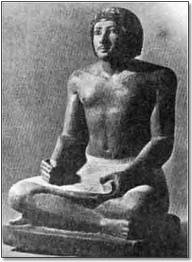 As I neared the table a man named Michael (who was also wearing egyptian clothing) motioned for me to sit down. He pulled out several glass vials (similar in size and shape to a large test tube) from a canvas bag and handed them to me for inspection one by one. Inside each glass vial was a cloud with a picture of a life story inside it, playing out as in a movie.

"You might be interested in these" he said, handing me two. Inside one, I remember an African woman carrying a child. "A harder life but less of an overall challenge" he said. I don't remember what was in the other vial, but I remember chosing this one. I recall the pleasant salty smell of a beach in warm weather. "I thought you might like that one," he said, smiling.

"Is that your final choice?" he said. I indicated that it was.

"Very well, please sign here". There was a large vellum scroll on the table, and a feather pen next to it.

After I added a sign to the paper (I don't remember what it was), he said "Good choice my friend. I know you like a challenge. I will see you soon!" and the dream faded away, and I woke up, still remembering the lovely breeze and the love radiating from the beings I had met.
Posted by dreamwalker at 8:25 AM